This change idea first sparked during a writer’s workshop session with my kindergartners. I noticed that I was only able to thoroughly confer with about 3-4 students per workshop session, and that much of my time was spent redirecting students. Through interviews with my students about Writer’s Workshop, they shared that it is hard for them to get settled into writing and that it can be hard to remember what to work on. I wanted to create a way to give visual reminders/cues to the students that would keep them on track without requiring a full conference or redirection from an adult. My solution was to create a visual deck of skills for students to work on, and to distribute the deck as nonverbal feedback to students during writing time. 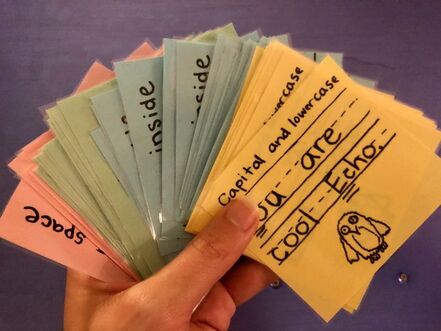 During writer’s workshop, I noticed that many students were having difficulty staying focused on their stories. Through interviews, they attributed this difficulty focusing to not being organized/having their materials ready for writing, and “not knowing what to do next.” Upon realizing that many of my kindergartners were neither organized nor focused for writer’s workshop time, I knew that I needed to make some tweaks in my approach. Research has shown that the average kindergartner can only hold 3-step (or less) directions in their mind before initiating a task, I wanted to make a support that would help my students get organized (even if they did forget my verbal directions.) I began by making a visual checklist of the materials needed for writer’s workshop time, and put a checklist in each student’s writing folder. This visual worked quite well for getting students settled independently, but did not address the issue of keeping students focused for the duration of the writing block.
Students expressed that they often could not stay focused because they were “done” with their writing, or could not remember what they were supposed to add or work on. As a class, we discuss often that “when a writer thinks they’re done, they’ve only just begun!” It can be hard, however, to know what to do next. On a good day, however, I am only able to check in with about three or four students during our workshop block. This presented a problem, as I did not want to sacrifice quality conference time with a few students to redirect/give quick messages to a higher quantity of students. Building on my visual checklist idea, I built a visual deck of skill cards to hand out to my students as they worked. I looked through my past conference notes, and aggregated my feedback into 4 main skills that my students were working on: punctuation marks, capital vs lowercase letters, writing inside the lines and adding a “two finger space” between words. As you can see, I decided to only include skills related to mechanics and grammar in the visual deck, as I wanted discussions about content and structure to be in-depth and verbal. As I navigated the room conferring with students, I would drop off a skill card from the visual deck onto a student’s desk if they needed feedback on “what to do next.” The deck was color coded by skill, and the students quickly came to know what each color means and got excited to see which skill they were going to be working on next.
In designing my change idea, I began my research broadly by looking into Universal Design for Learning (UDL) Culturally Responsive Teaching (CRT). From my research into UDL and CRT, I pulled out some major strands of thinking. The first was to be careful not to look at differences as deficits. The differences among my kindergarten writers are also their greatest strengths, and are the driving force that gives them each a different skill set and different story to tell. The second major idea was to look at barriers to success from within the curriculum, instruction, and assessment methods rather than as deficits within students. This made me look really carefully at my own practices during writer’s workshop time, rather than focus entirely on student behavior and engagement level. It is my job as the teacher to create a supportive learning environment where my students can succeed. It also stood out that both UDL and CRT are intentionally built into teaching practices, not implemented as a reactionary measure after an issue arises. One of the articles I read describes both UDL strategies and CRT as ongoing processes that require regular reflection, differentiation, and tweaking. Dosch and Zidon (2014) described the practice of differentiation as a repeated cycle of teaching and assessment in which assessment informs the next steps of instruction. This felt very relevant to our cycles of inquiry, and to the several iterations my change idea went through. I began with the idea of sticky notes for nonverbal feedback, then the idea grew and grew until it reached its final form in the laminated, color coded deck.
This process has transformed my teaching by helping me think of high efficiency, low maintenance ideas that can improve my students’ learning experiences. As a first year teacher, I was often getting caught up and bogged down in ideas that demanded a lot of preparation work, but did not always pan out. I would let myself delve too far into the minute details of one plan before checking to see if it had any positive effect on students’ learning. The whole focus of this change idea was, instead, to make one small tweak or shift at a time and carefully evaluate the impact of the change. It allowed me to be nimble and flexible with my time and strategies.           Taking the time to create visual systems of organization and feedback for my students during writer’s workshop also allowed me to use our time more wisely during school hours. Students were able to get prepared for writing time, and then stay focused once it began. I was able to confer (uninterrupted) with more students than ever before, which ultimately gave my students more focused time to explain, practice, and improve their writing. This idea also allowed me to “confer” with students quickly through the cards in the visual skill deck, which was effective for several focus students who needed a visual reminder to stay anchored and on task. 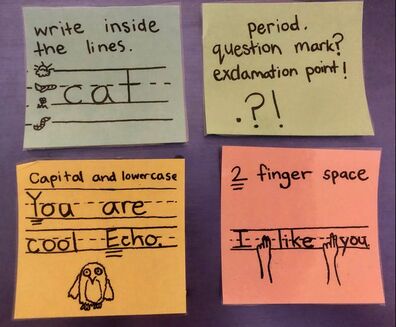 Through this process, I learned a lot about my students. I learned to look at my own teaching practices first instead of potentially putting the blame on students for their perceived lack of focus or engagement. I tried hard to look at my students through an asset-based lens, which led to some big realizations. My students were able to clearly communicate with me what they needed after I asked them what was going on during Writers Workshop time. Some of them were struggling with task initiation, but that was really because they had forgotten what materials they needed for writing time. Others seemed unfocused during writing time, but that was because they didn't know what next steps or revisions to make in their writing. My students are very creative thinkers, and I saw that each of them had stories to tell during workshop time. When they were uncertain of what to do or where to go next, it became hard for them to share their stories with the class because so many small things were getting in the way.
By asking students what they needed, I was able to make small changes in my teaching practices that improved writing time for all of us. Student learning was impacted because I was able to give feedback to a greater number of students during writing time. This feedback, verbal and nonverbal, was targeted to match what the student needed at the time. I was able to give small bits of feedback to students through the non-verbal card deck, which kept them on task and allowed me to meet and confer more deeply with the students on my conference schedule. This helped the students that I had conferences with, because our time was uninterrupted and focused. This helped the whole class, because more students were on task and anchored in their writing time which decreased distractions and contributed to overall focus in the room.

During the course of my first cycle of inquiry, students improved their task initiation efficiency with a visual checklist of their materials on the whole. 2 focus students were able to dramatically increase their instances of independent task initiation without teacher redirection or reminder (an increase from 0/4 instances to 2/4 instances). This led to fewer distractions and more overall time spent writing for the focus students, as well as the whole group. For some students (6/23), keeping track of the checklist itself proved to be an issue. I learned that it is hard for kindergartners to keep track of materials. This week, I have switched to using a whole class slide that is projected at the front of the room with their checklist.
When I used sticky notes for nonverbal feedback, students were able to independently make changes to their written work from the nonverbal cues. It was a lot of effort to make new sticky notes each time, so I finished out the cycle collecting data but reflected on ways to make the system more streamlined.
Once it was introduced, students loved the visual feedback deck! They were excited to see if they got the same skill to work on as friends at their table. I noticed an overall decrease in noise level during Writer’s Workshop time. I also tracked the number of interruptions during my conference time. It decreased from 8x per session to about 3x per session. This is a significant decrease. In spot checking student work after distributing visual skill cards, I noticed an increase in the number of students who were applying the skills within the deck. In particular, 2 of my 3 focus students both showed evidence of applying their skill for the day in 3 of 4 checks of their work. FS3 applied his deck skill in 2 of 4 checks.

Want to Try it out?

My change idea is to create  a visual deck of skills for students to work on during Writer’s Workshop, and to distribute the deck as nonverbal feedback to students during writing time